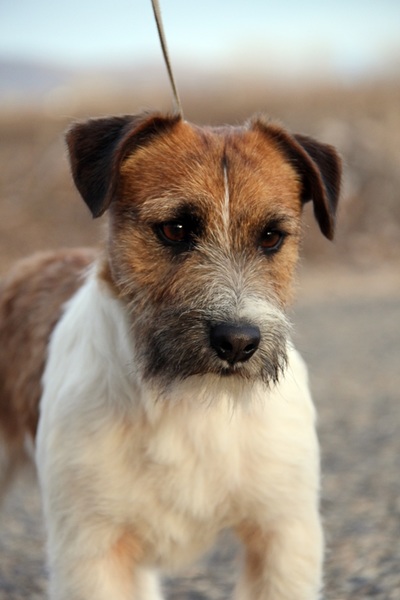 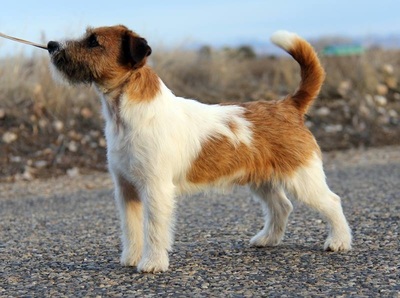 CH River Branch Golden Rule, aka Trooper, is a son of Falling Branch Solid Gold (Solomon) and out of Falling Branch Lady in Red, out of a daughter of AM CH, UK RBIS, Multiple group winning Jacklands Caruso Calypso Coffee.
Trooper was a puppy who only weighted 3 ounces at birth and had a rough start.  No one gave him even a 1% chance of surviving.  But I was not about to give up and neither was Trooper.  After a couple days of tube feeding, my miracle puppy took off and held his own with his two big sisters at the milk bar and never looked back.  At 8 weeks of age he was catching up in size to his sisters and by the time he was 4 months, I knew I had something special.
Trooper has a very think, hard broken coat with enough under coat for two Russells.  His substance is impressive, yet he is not coarse.  His structure is obvious in his ground covering movement.  He has done extremely well in the show ring, getting both of his majors owner-handled in a ring full of pro handled dogs and finishing his AKC Championship all owner-handled.
Trooper has his first champion offspring, CH River Glenn Miss Hollywood, Holly.  We could not be happier what has produced so far!
Trooper is, of course, BAER normal, CERF normal, PLL normal, patellas normal.